The  nerve of them spouting that racist crap in our lunch room. I was so upset yesterday. Upset enough to drive home mad and feel sick to my stomach most of the evening. I had to slap my mind down and lead it back to a better place over and over.

I would expect it from ‘A’ who has already aired his offensive views liberally, but I was so disappointed in ‘B’ who I really like, even hoped to make friends with. It started with the bombing in Brussels;

“That’s what they get for letting them in”

They started about we shouldn’t be letting “them” in. I started to counter with facts and reason until I was so blown away by ignorance I couldn’t speak.

“They come here and then we can’t pray in school or pledge allegiance to Canada.”

“They refuse to learn the language and our ways.”

” They don’t want to work and go on welfare.”

“We should be helping them in their own country.”

I was dumbfounded. Do you not know the definition of refugee? They have no home. They are fleeing the terroists. Have you not seen photos of Syria?

Apparently, not. Why would they watch any show or news story about ‘them’? They don’t want any bleedingheart liberal facts!

I had started to argue because I will always have the nerve to stand up to ignorance.  I tried to tell them they were screening people, hard-working people with children. I said we needed immigrants to pay for our aging population’s old age pensions. They ignored me and just went on with the old rhetoric.

What a shame I had to hear it, you can’t un-ring a bell. But the lunch room is not the place to argue and create bad feelings. They were wrong to know they offended me and yet continue. That’s why I say, “the nerve of them” to knowingly offend me then go on and on.

They are ignorant of the facts and say the same stupid things over and over out of habit. There is nothing to fight over. I’ll try to choose love, corny as it sounds, because that’s the tool, the weapon to use against hatred and ignorance.

Thank Goodness, we have Trudeau and a government with intellect and compassion. I can try to forget these people’s comments because they don’t matter. Fortunately, they are not in charge. Hopefully, they are not the majority.

I cut my break a few minutes short to get away from the foul mouths. It was like being at my aunt’s nursing home that smells of poo and then you can still smell it on you long after you leave.

It’s most disappointing from someone I’ve been ‘friends’ with for two years, then hear this come from her.

We are all human beings living on this planet; we’re all in this together.

My hope for the future would be if Bernie Sanders got elected in the U.S.  Wouldn’t that be wonderful?

So today’s one word prompt is friend.  I’m in one of those ‘trying to buoy myself up’ phases and was going to write the prompt “no matter what….” today because I haven’t written in so long. ‘Friend’….. it has to be friend… a sore spot in my life as I still haven’t made a good friend around here.

I do have friends, 71 friends to be exact.  I keep in touch with many friends I’ve made over the years thanks to Facebook. There was a tight group of friends in Toronto when I was young: some of us moved to Vancouver, some moved there then went back to Toronto. Now we are spread out all over British Columbia and Ontario.

I moved to this area about 7 years ago and have had this job for 2 years. There are friends at work and friends at Zumba but I still haven’t met anyone who I really click with, someone who ‘gets’ me. Most people my age have so many friends, kids and grandkids they don’t have time for new friends.

Living alone and doing everything by yourself gets very tiring, especially if you have a house.  There is more to do than I can do.  Lately I haven’t been able to even get a day at home between doing favours for people and working. It’s too much.  I drew the line when someone asked me go to this rural place to buy pies because store-bought pies weren’t good enough.  I was cleaning the bakery that night; “Pies? you want pies? and not pies from here, of course…… you want good pies!”

Mind you, taking my grandnieces to see Zootopia and staying overnight was fun but it was exhausting. When I got home there was message on my machine that my aunt in the nursing home needs new shoes…… again. I had to work the next day.

I swore I would go after work last night but I was way too tired. My boss was cracking the whip, giving me those looks like I’m never doing the right thing. I stayed later than my shift to get the damn  cream pies done. When I got home and out of that horrible uniform I flopped down on my couch and thought about how hungry I was.

And that’s the down side of living alone and having no friends. There is no one to help buoy you up. No one to come home to, tell about your rough day, sympathize and talk about something else. You are left alone with those little ‘ding-downs’ that run through your head, over and over,  long after someone has unwittingly let it fly from their lips. Trying to get those voices out of your head and replace them with;

“Don’t be so hard on yourself!”

You have to be your own best friend but sometimes it’s like pushing water uphill.

Today I go to the nursing home to see about my aunt’s feet but there are no shoe stores around here. It means a trip to TOWN. But not today. I could not face driving around a city looking for shoes today.

I’m working tomorrow and we are gearing up for the Easter eating frenzy. Not as crazy as the Christmas or Thanksgiving gluttonous eating frenzy but still pretty big. Buns, hot-crossed buns, Bunny cakes….. and make lots so we don’t run out and make people mad……. we can throw the extras out on Tuesday.

What was this about? oh yeah, friends. I wish I had some good friends around here. Friends that don’t want me to do them any favours.

Darn it, I missed the prompt “Screen” the other day and it fits so well with the story I’ve been thinking about putting down in print, before it’s lost forever. Maybe I did see the prompt but didn’t think of it, at first. It must have percolated: through to my subconscious, picking through the memory files, working it’s way out a day later.

Back when I was a bee-keepers wife and worked at a Farmer’s Market, there was an older Italian lady who would pick up a beeswax bar, smell it and smile.  It was only a dollar but she never bought one. She didn’t speak English so when she came, smelled it and smiled, we would just smile and nod at each other.

One day she came with her daughter who said, “My mom wants to tell you why she loves the smell of beeswax so much.”

She was from a small town in Italy. When a young married couple moved into their new home the local ladies would get together with cotton thread and beeswax. They cut the thread into strands the length and width of their doorway. Two on a thread, they ran all the strands back and forth through beeswax until they were thickly covered then working all together they wove a screen for their doorway to keep out flies. It was a happy time: they sang and gossiped.

They hung it in the kitchen door like a curtain and it lasted for years and years.  In the summer a breeze would flow through it and you could smell the beeswax. Whenever she came to the market she would pick up the beeswax bar and the smell would take her back to those happy times.

I was so touched my this story and so happy she took the time to get her daughter to tell me, I insisted she take a bar of beeswax. At first she wouldn’t but I said it was well worth such a great story.  Now I have that beautiful memory.

The reporter literally didn’t know the meaning of literally when he said, “She literally sang her guts out.”

I thought it was going to be a story about how she sang so hard she threw up. 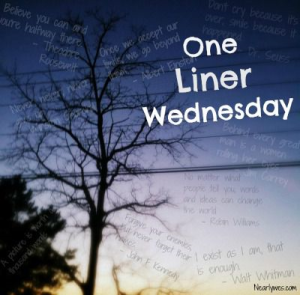 The  biggest Secret where I work is if my boss is gay or not. (OH, gosh, I hope he doesn’t secretly know about and read my blog).

His speech and mannerisms are definitely stereo-typical of what we imagine gay guys are like. When he points to something, it’s with a flair and the other arm goes out to balance the move. He walks….. well, I like him and don’t want to make fun of him. You get the idea.

But there is never a clue as to what his preference is. There is lot of speculation but I’ve learned my long years that stereo-types are not always what they seem. I’ve known people I thought were gay and weren’t, and people who I thought couldn’t possibly be gay that where.  You just can’t stereo-type.

The other day, in the lunch room, with the afternoon shift coming in, a young guy who works in the deli said something like,  “someone gay in the bakery”. All of sudden there is silence and all eyes are on me. One of the managers, who has been there for years, freezes with his coffee in hand and waits for my reaction.

“Nobody knows!”  I blurt out, “We all wonder, but nobody asks and nobody knows.”

“That’s exactly right!” I said, “who cares? I would just like to see him happy.”

Although attitudes are changing rapidly, the small town attitude is just starting to turn. I think people would totally accept his being gay. They already think he is…… but maybe he isn’t.